When he became a commercial pilot at age nineteen, Bill Grenier never imagined that one day he’d be a wealthy man.

But he would ultimately control an empire worth nearly a billion dollars—all on his days off from flying!

With liberal doses of wit and humour, Miles to Millions shows what a little luck, lots of perseverance, and an appetite for adventure can do. From boarding house to boardroom, from cradle to cockpit, the reader will be along for the ride in this tale peppered with anecdotes that bring his story to life.

The book runs to more than 394 pages and includes 30 images, in both colour and black and white.

Scroll down to read two exciting excerpts from the book

A short synopsis of the book

Bill’s beginnings were certainly modest. Born in a tiny village in Newfoundland, he spent his childhood being shuttled around Canada by his mother and stepfather. While still a teenager, he defiantly put an end to this unsettled, unsatisfying existence. He decided he would live life on his own terms.

While he gazed up at an airplane one day at age nineteen, his passion for flying was born. On his twentieth birthday he was flying dangerous cargo missions in the Arctic, supplying workers on the distant early warning (DEW) line. At twenty-one he landed his dream job with Trans-Canada Air Lines.

However, Bill’s early career took a challenging turn when a temporary layoff forced him to find creative ways to earn a living. He learned valuable lessons while negotiating the tough world of repossessions and later while flying corporate executives for General Electric.

When he returned to the airline, he ascended the ranks to become a captain at Air Canada, where he flew everything from DC-3s to 747s.

And on his days off … real estate development, for starters

The layoff from the airline had made him realize he needed the security of additional sources of income. On his days off, he began his corporate career with what looked like a simple job—the development of a rural subdivision. That experience provided the foundation for the syndication of urban high-rises, hotels, and shopping centres.

Initially with little knowledge of the building industry, Bill learned the value of surrounding himself as CEO of Pagebrook Inc. with experts, and he acquired the fine points of construction, negotiations, management, law, and leadership.

Bill dove into the uncertain worlds of blue-water ships and financial trusts, eventually garnering one of his companies, Pagebrook Securities, a seat on the Toronto Stock Exchange.

To his surprise, by age forty-nine he controlled nearly a billion dollars in two public and fifty-three private corporations. He acted as a government advisor in two areas of real estate, and at fifty he retired from flying a wealthy man.

Captain Bill Grenier’s riveting descriptions of everything from the joy of slipping “the surly bonds of Earth” to the thrill of negotiating lucrative business deals will captivate readers. See testimonials below right. 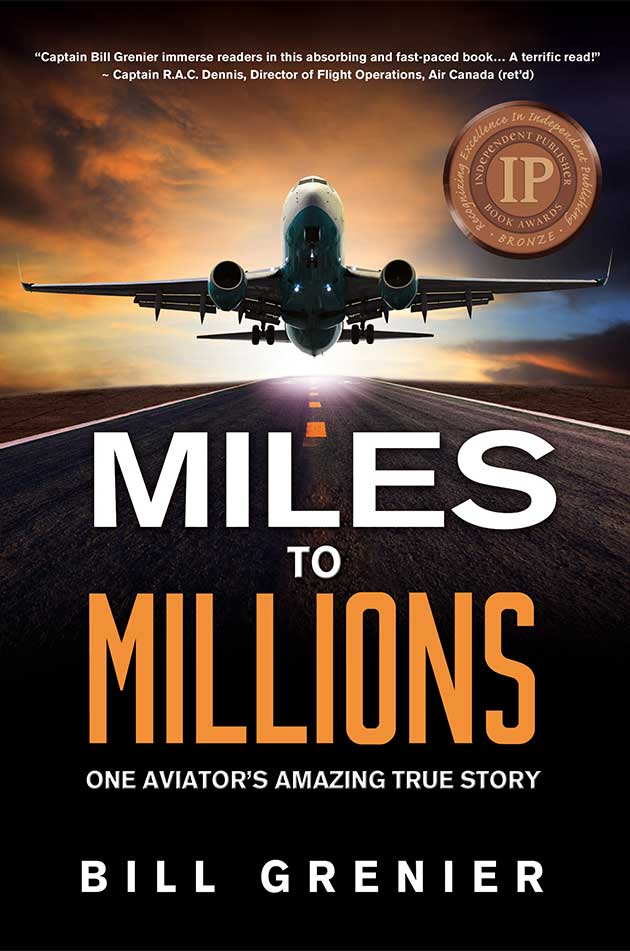 Excerpts from the Book

I pushed open the taps and the 747 started to roll on runway 10R. Acceleration was rapid as Ken called the standard speed checks: at 114 knots our last chance to abort the takeoff, then at 137 knots “rotate,” and I eased back on the pole. With little wind and a moderate temperature, the performance was standard as we started our climb-out right on the numbers at 144 knots.

Sitting in the captain’s chair on my left, Ken reached across the throttle quadrant and with his right hand pulled up the lever near my left knee.
I heard the nose gear door open, and the gear started its usual discontented growl upward.

“Oh, Christ,” said Jack, the second officer, seated aft and between us.

I glanced sideways at Ken. His upper torso was lying across the throttle quadrant on the power levers, his arm dangling down below the gear handle.
Apparently he had fainted, and he was now unconscious. Without another word, Jack slipped his shoulder straps and with one heave lifted Ken back into his seat and cinched his seat belt and shoulder harness tight. Ken’s head lolled back against the headrest. We were now at about four hundred feet, and my heart rate took an uptick. I grabbed the taps and eased them back to climb power to avoid breaking our noise maximum on the ground monitor, “Charlie,” four miles off the end of the runway.

Jack hit the flap lever, and the nose dipped forward as the flaps and slats started up their tracks and the wing geometry changed to cleaner configuration for normal climb attitude.

I glanced at Ken again and my heart took another upward leap; his face was ashen and he looked as if he were struggling for breath.

Visibility was good as I did a quick scan of the horizon. I knew instinctively we were not going to Montreal today. My first thought was to dump fuel down to landing weight and get Ken to a hospital. With a near-full passenger load and heavy on fuel for the ocean crossing, we would need some time to get down to landing weight. Takeoff weight is much heavier than landing; landing at this weight could put excessive strain on the gear.

In the worst circumstance, it could cause some deformity of the aircraft structure through bending and twisting forces that the craft is not engineered to handle. I thought we had best get over the water around Land’s End lighthouse or over the North Sea and commence dumping—pronto.

Jack’s voice again. I heard it, but I didn’t want to hear what he was saying.

“Bill, we have another problem.”

To find out what was wrong with the brand new 747, read the book and turn to page 2.

I had encountered many policemen in my travels, but this one was the shiniest, most gussied-up one I had ever seen. He was a vision in brown and black. His sunglasses were huge, much bigger than my aviation glasses. His shirt was tight and his pants creased razor sharp. He wore a gun on his left hip and cuffs on his belt. A black baton dangled from his right hip. His boots gleamed maroon; I almost expected to see a set of spurs. His tie was cinched up with a tight little knot, and a row of military-type bars across his left shirt pocket patch added to the stature.

Something else caught my eye: two miniature silver airplanes that looked like tie-tacks on the end of each collar point. And to top it all off, a set of dime-store wings was pinned on his left chest. He was about six foot four and about 220 pounds. I am six two and 190 pounds, and he looked very large to me. His head was a square block of meat—jowly, but not fat. He strode faster than most people do in the South. I guessed he was ex-military something or other.

Then he spoke. “How y’all doin’, young fellow? Hear you want to take away one of our airplanes.

The image shattered. His voice was at least two octaves too high for the size of the man. It sounded like a prepubescent choir boy’s. I almost smiled at the voice but instead tried to sound professional, one man to another, both on a mission to get things done.

“Good morning, sergeant.” I used that title because I had no idea what to call this apparition. I assumed his title would come out when he introduced himself.

I extended my hand for a handshake. He took it and almost crushed every bone. I did not mean to, but I was sure I winced slightly. I thought I saw a glint of pleasure in his eyes as he whipped off his glasses and looked down at me. The two-inch difference in our heights made a one-foot difference in attitude. He was clearly in charge and clearly enjoyed his status. A slight shadow of a premonition seeped into my mind.

“Y’all call me Sheriff. Sheriff Johnston. I am the law in this county. Heard you was in the motel last night, makin’ a bit of noise. That true?”

To find out how Bill managed, to outwit the sheriff in Mississippi, read the book and turn to page 64.